2021-22 WINTER ACADEMY PROGRAM'S INFO ALREADY PUBLISHED
CHECK 2021-22 WINTER INFO in wi
​WI FFA Elite Teams Program: Geared to competitive players, teams will consist of 7-10 players of like abilities who train together and look to compete regionally, nationally and/or internationally (depending on the age group and season) in a few Futsal tournaments and events. During matches and tournaments, teams will be professionally coached and will represent Wisconsin Futsal Factory Academy. Due to the highly competitive nature of Futsal Factory Academy Teams, most participants will gain access to these teams through a series of Evaluation Nights
"Futsal factory is an awesome program run by experienced and knowledgeable coaches who maintain a fun and positive environment. Highly recommend!" - Peggy and Gabe Jacobe - Parents of Louie 2009 and Charlie 2006
Started in Michigan in 2014, Futsal Factory Academy's methodology is designed to focus on technical, tactical and physical abilities of the quicker, faster game of Futsal.  Further, it is our goal to mentally challenge each player understanding the proper game of Futsal and how its technical and tactical specifics may apply to the modern Soccer game.

"In Futsal you know whether a player is really talented. In normal football you don't necessarily identify talent as easily because it's much more physical. But with Futsal, you notice the small details in quality, class and tactical understanding." - Xavi, Spanish National Team and FC Barcelona Legend.
​
Our goal is to identify top Futsal players in Wisconsin and teach the technical, tactical, physical and psychological aspects of Futsal the correct way so the benefits translate to outdoor soccer at an exponential rate. 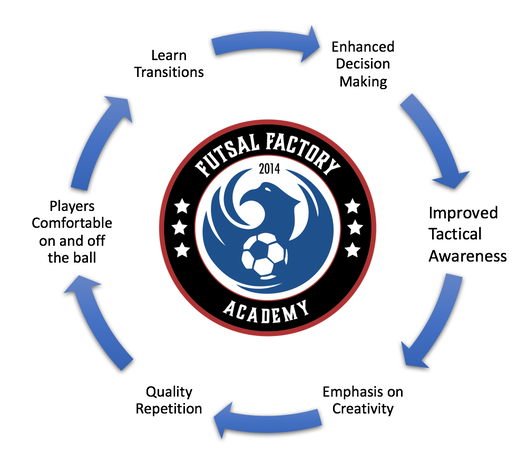